Since forming in 1972, the Brodsky Quartet have performed over 3,000 concerts on the major stages of the world and have released more than 60 recordings. A natural curiosity and an insatiable desire to explore has propelled the group in a number of artistic directions and continues to ensure them not only a prominent presence on the international chamber music scene, but also a rich and varied musical existence. Their energy and craftsmanship have attracted numerous awards and accolades worldwide, while their ongoing educational work provides a vehicle to pass on experience and stay in touch with the next generation.

Throughout their career of over 45 years, the Brodsky Quartet have enjoyed a busy international performing schedule, and have extensively toured the major festivals and venues throughout Australasia, North and South America, Asia, South Africa and Europe, as well as in the UK, where the quartet is based. The quartet are also regularly recorded for television and radio with their performances broadcast worldwide.

Over the years, the Brodsky Quartet have undertaken numerous performances of the complete cycles of quartets by Schubert, Beethoven, Tchaikovsky, Britten, Schoenberg, Zemlinsky, Webern and Bartok. It is, however, the complete Shostakovich cycle that has now become synonymous with their name: their 2012 London performance of the cycle resulted in their taking the prestigious title ‘Artistic Associate’ at London’s Kings Place and, in October 2016, releasing their second recording of the cycle, this time live from the Muziekgebouw, Amsterdam.

The Brodsky Quartet have always had a busy recording career and currently enjoy an exclusive and fruitful relationship with Chandos Records. Releases on the label include ‘Petits Fours’, a celebratory album of ‘Encore’ pieces arranged exclusively by the quartet for their 40th anniversary; a Debussy compilation; ‘In the South’, featuring works by Verdi, Paganini, Wolf and Puccini; ‘New World Quartets’, comprising works by Dvorak, Copland, Gershwin and Brubeck; the quartets of Zemlinsky, including the world premiere recording of his unpublished early quartet; two Brahms discs, featuring the iconic Piano and Clarinet Quintets; the complete quartets of Shostakovich and the Elgar String Quartet and Piano Quintet with Martin Roscoe. Their most recent release, the Late String Quartets of Beethoven, was released to coincide with their performance of the repertoire at Kings Place

As well as partnering many top classical artists for their performances and recordings, the quartet have made musical history with ground-breaking collaborations with some of the world’s leading artists across many genres and have commissioned and championed many of the world’s most respected composers.

Awards for recordings include the Diapason D’Or and the CHOC du Monde de la Musique and the Brodsky Quartet have received a Royal Philharmonic Society Award for their outstanding contribution to innovation in programming.

The quartet have taught at many international chamber music courses and have held residencies in several music institutes including, at the start of their career, the first such post at the University of Cambridge and latterly at the Royal Conservatoire of Scotland, where they are visiting International Fellows in Chamber Music. They were awarded Honorary Doctorates by the University of Kent and an Honorary Fellowship at the University of Teesside, where they were founded. The quartet took their name from the great Russian violinist Adolf Brodsky, the dedicatee of Tchaikovsky’s violin concerto and a passionate chamber musician. 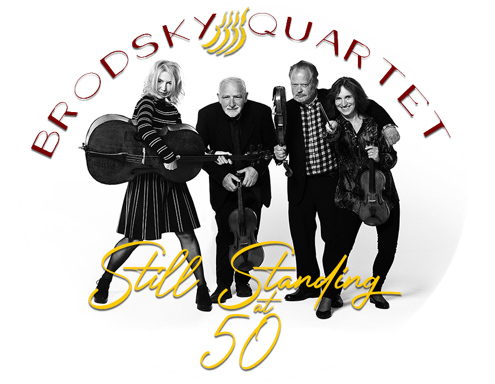 “… The Quintet is a work of such mastery that it rarely fails to bring out the best of its players, which is precisely what we hear in this performance. Concentration is never allowed to sag, commanding the attention throughout, with no drop in intensity over this expansive canvas… this is a recording that demands hearing”

“… The playing is often limpid and gentle, nicely textured, and well integrated… the Brodsky Quartet players are well in tune with each other, and the ensemble is rich and finely nuanced …”

“… Throughout the album, Dankworth never loses sight of the song’s message…An excellent album all round, and arguably the singer’s best since ‘It Happens Quietly’…” 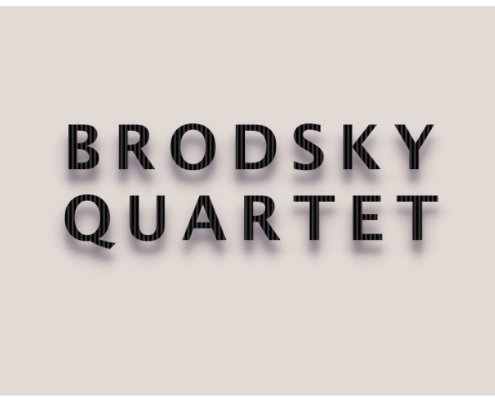 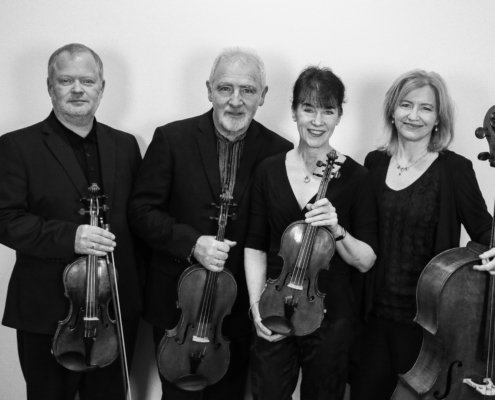 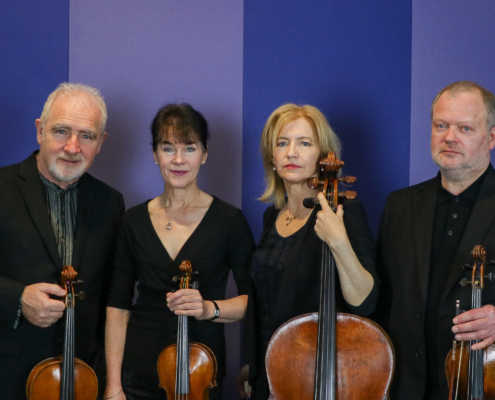 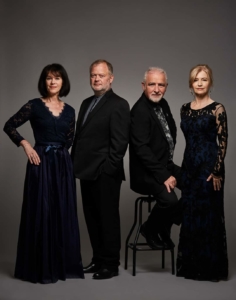 Shostakovich’s string quartets are seen by many as being autobiographical. They were written spanning 3 and a half decades from 1938 to 1974 from his early thirties to the year before he died. The Brodsky Quartet can perform all 15 quartets in 5 concerts over 3 days or spread over a season.

They can be grouped in a number of different ways, either in chronological order or linked by themes. Successful performances have been given recently in Sydney and Melbourne, Australia; Kings Place in London and Bristol.  This is also a great project to join with a university or conservatoire. The quartets can be shared between student quartets who have been coached, students who are joined by one member of the Brodsky quartet, just the Brodsky Quartet and often String Quartet No.8 is performed as a chamber orchestra with all participating students involved.

‘…the opportunity to experience the complete quartets in live performance is a rare privilege… Presented across five sessions, the cycle was delivered non-sequentially. This dramatically highlighted the diversity in structure and scale employed by Shostakovich across a 36-year period of composition. At the same time, it revealed the constancy of motivic devices (including his four-note signature), jagged chromaticisms, attenuated sequences and dance forms the composer employed in his most autobiographic body of work…’

In celebration of the Brodsky Quartet’s 40th anniversary in 2012 they presented the ‘Wheel of 4Tunes’! This fantastic event promises a diverse programme of music chosen in an informal and fun way. Throughout the evening the wheel will be spun to create a programme from a selection of 40 of their favourite quartets and short pieces.

The music will all be kept at the quartet’s feet throughout the concert and each piece will be picked out as it arises! The quartet will also discuss the music and invite questions from the audience – creating an ‘Audience with the Brodskys’ feel.

1st spin – All the pieces in this section are typical ‘openers’ of around 5-10 minutes long and range from Mozart and Schubert to Piazolla and Turina.

2nd spin – These pieces are about 20 minutes long and again show a wide range of composers from Beethoven to Britten. They are all pieces that the Brodsky Quartet would offer in many of their concerts.

3rd spin – This section presents works that were written in the quartet’s lifetime – a great opportunity for audiences to hear something new.

4th spin – These are the longer, more traditional string quartets of about 30 minutes such as Elgar, Mendelssohn and Schubert