Júlio Resende is a musician, pianist and portuguese composer.

Resende has a background in Classical Music, that he loves, but he soon discovered that he was not satisfied with just being a performer of compositions in which he could not improvise.

Júlio has already recorded four published records, following a path which originated in Classical training, matured through Jazz and recently arrived at Fado, in a perfect blend that makes such a fusion of musical genres appear to be the most obvious of things.

The intense and very relevant path through the universe of jazz, led him to think improvisation about other musical genres. He arrives now to Fado, where he crosses tradition with modernity and launches, from his piano, a new look about the Portuguese Song.

Based on some of the most popular songs of Amália Rodrigues – the Diva of Fado – Júlio Resende presents a new challenge: to bring Fado to the piano; to sing melodies with the piano, instead of merely accompanying them; to express with a piano everything Fado stands for.

Talented and creative improviser, Júlio goes even further and risks an (Im)possible Duet with Amália, serving the diva’s voice with his piano on the track Medo. 15 years after Amália Rodrigues’ death, Júlio Resende’s convinced Valentim de Carvalho (label of Amália Rodrigues) and, for the first time in all history, a musician was allowed to play with the late diva’s voice.

The result is an exhilarating record where the traditional and the modern dwell in harmony, Patrimony is preserved through inovation and Fado and Saudade emerge from the depths of Jazz.

Amália by Júlio Resende was unanimously acclaimed by all the Portuguese musical criticism and it has recieved CHOC DISC*****5 Stars by the prestigious French magazine CLASSICA, which ranks the best musicians and instrumentalists of the world.

“The Portuguese pianist honored the Diva of Fado Amália Rodrigues, and the audience was delighted to hear the wonderful voice of the singer, 15 years after her death.”

“The Portuguese pianist honored the Diva of Fado Amália Rodrigues, and the audience was delighted to hear the wonderful voice of the singer, 15 years after her death.” 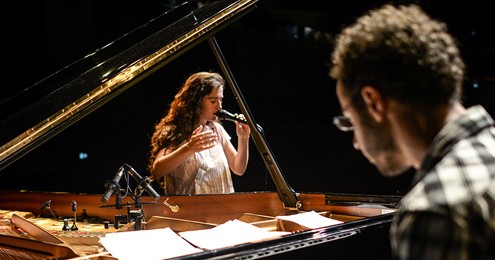